No, he went back to the country Bill Gates's father Bill Gates S.R. 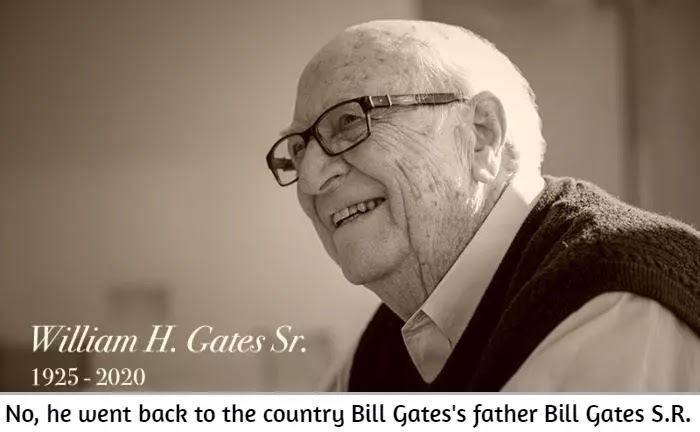 Hope everybody is well. Today's tech-news is different from the other day because Bill Gates, the father of Bill Gates, the founder of Microsoft. Died. His father was 94 years old at the time of his death.

Bill Gates announced on his own website on Tuesday, "My father died at home next to the family, in peace."

"My father's death was not unexpected. He was 94 years old and his health was declining day by day, so we were really lucky to have this wonderful man in our lives for so many years.

As his father left, Bill Gates wrote, "The experience of being the son of Bill Gates Sr. was incredible. People would ask my father if he was the real Bill Gates. The truth is he was what I tried to be, I will miss him every day." ".

Bill Gates Sr. Was the co-founder of Preston Gates & Ellis, which was currently the predecessor of the international law firm K&L Gates, he also served as president of the County and State Bar Association at the same time. Most recently, Bill Gates Sr. served as vice president of the Bill and Melinda Gates Foundation, where he provided vision and strategic direction for the foundation.

Bill Gates wrote, "The Bill and Melinda Gates Foundation could not be where it is today without my father. He shaped the foundation's values ​​more than anyone else. He was important for cooperation, justice and learning. I thought so. "